While the company Ripple is making massive strides so far, below are my speculative thoughts on the price of the XRP currency.

The price is back to being fairly stable right now but I believe there is another surge coming. Last year we saw an initial surge of 1c – 20c, then a second (quicker, much publicised) surge of 25c – $3.25 over a few weeks.

Firstly, there is no new money entering the market right now (from people who want to buy crypto). What I mean by this is that for weeks exchanges have been closed to new users. When I say people who want to buy crypto I am referring to the launch of DMM.com’s feature to sell XRP (among others) for fiat Yen. DMM has 27m users, but this doesn’t mean they want to buy crypto. They signed up to avail of the other services, and most haven’t jumped at the opportunity to buy crypto (probably don’t know what it is or have zero interest in owning volatile commodities). Nevertheless, the launch of this feature saw a massive spike in the price of XRP.

I’m using CoinMarket cap for this instead of a specific exchange, but DMM launched the feature at midnight Tokyo time (or 3pm UK time). We can see that within the time around launch (2pm – 3:30pm the price jumped from $1.72 up to $2.20.

So we can take from this that when new money eventually enters the XRP market, there will be a price spike.

My main focus is on watching Bittrex & Binance opening back up to new users. These users are engaged, ready and willing to buy crypto (unlike users of DMM who signed up to buy consumer goods online, stream videos and do other stuff that DMM does.) The CEO of Binance was recently on Bloomberg [Jan 10] discussing new users. In the hour they open registration for each day they get 240,000 new users!! In just one hour. [https://youtu.be/7Y5IvLCwaHI?t=2m21s]

Imagine the numbers that will flow in when they open the gates fully, and if these numbers are matched on Bittrex!

According to web traffic analysis by SimilarWeb both have similar monthly traffic numbers.

Currently, we can see that Binance accounts for 8% of all XRP trades while Bittrex is just 4.5% [https://xrpcharts.ripple.com/#/] . Again, Binance is open for new users one hour per day. Bittrex has been fully closed since mid-December.

Bittrex has 20m more website visitors than Binance, but about HALF the XRP trade volume.

My basis for presuming that some/a reasonable portion of this “new money” when it does reach these exchanges will flow into XRP are for a few reasons.

First, presumably most of the new money will be from noobs, who are throwing money in due to FOMO and will just buy what they’ve heard of. (Bitcoin, Litecoin, Ethereum & Ripple).

Positive business partnerships being announced for Ripple in the news has definitely helped elevate XRPs profile.

Secondly, I have reasonable confidence to believe that when the Noob money arrives, many will be looking at Ripple specifically. When we look at Google Trends for what people are trying to buy, we see that “buy XRP” is much higher than the others. And, that “Buy Ripple” surpassed interest in “buy Bitcoin” on Dec 30th!!

New users are needed to increase the price, there is currently little buying demand for XRP as most who own it bought in at least 5 weeks ago, when the price was less than 30c and are HODLing. As it stands now, it is mostly impossible for new money to enter the market.

For anyone who does want to invest in ripple right now, the only option is to buy through a CFD platform like eToro. Google Trends analysis of eToro shows a massive spike in interest starting at the end of November. (when Ripple began surging)

The top related queries for eToro in order are: Ripple, ripple etoro, xrp, etoro xrp, coinbase. The top of 4 of 5 related searches related specifically to XRP. All of which are breakout queries which are defined as: “”Breakout” had a tremendous increase, probably because these queries are new and had few (if any) prior searches.” ie. sudden surge in XRP interest

So we can see that eToro (originally used for buying blue chip stocks/CFDs like Apple, Tesla, Amazon, Facebook, etc) is now surging in popularity due to searches for “eToro” which are being solely driven by interest in XRP (as its the only place they can buy it). The 5th query, coinbase, can further demonstrate that all the new users are focused almost solely on crypto. Note, that in the eToro FAQ section it does state that for crypto coins users are buying actual XRP and not CFDs as of September but that they can’t withdraw them to their own wallets until later in 2018.

Although this shows interest, by mid-December the min deposit on eToro was $500, which has now increased to $1,000. I believe that many of those looking to get into crypto are being turned off by this. (IMO) eToro, rather than close their site to new users (like Bittrex), they have just decided to set a high barrier to entry. This has occurred due to “incredible client and volume growth” and which has seen “the minimum deposit … raised, going from 50$, to 100$, to 200$, to 400$” and now $1,000. [source] This may get lowered but it’s not important.

The primary point is that there is serious buying demand for Ripple right now, I would assume that many of the buyers who will not part with $1,000, will wait to buy in from Coinbase/Coinsquare (or even Bittrex if they are that savvy) at a lower investment point, and that at that stage the users will come in much larger numbers. (eToro has reportedly 6m users as of July ’17, far before the massive surge in interest of December ’17)
Wallets

So what happens if the number of wallets increases again? We currently have 1m users who are capable of holding XRP. I saw this posted before and it was challenged that the actual number of users will be lower as most people use more than one exchange.

Coinbase, who will eventually launch XRP, have 13m users. (I might outline my logic around why I’m very confident on this in another post)

It’s difficult to say how many users Binance & Bittrex have, but we can presume (from above) that they both receive 100m+ website hits per month. And that Binance receives 240k new users per hour, which for now = 1.6m new users per week.

Coinsquare (the largest exchange in Canada), have publicly announced that they are going to enable XRP on their exchange in 2018.

DMM launched XRP for sale in Japan, they have 27m users. Instant spikes aren’t likely from this, it will take time, when Ethereum was added to Coinbase there was no instant massive spike. The primary concern is that users have the ability to buy XRP, which right now many do not.

Again, we are only at 1m wallets so far. There is a lot of room to grow yet.

I am reading a lot about market manipulation at the minute, I’m skeptical of a lot of what is being written but will say that we are currently in a vacuum. There is a finite number of XPR traders now. So some are inclined to believe (maybe correctly) that the price is manipulated downwards so whales can buy up cheap XRP by creating downward pressure, scaring buyers who got in 30c or less to sell off part of their holdings and take their profit.

When these exchanges open to new users (and there will be millions of them), there will be absolutely no way that the price can be kept down.

This is my short term thinking (6 months), long term (1 year +) I believe that Ripple & XRP will garner a lot of momentum and massively increase in price regardless, it will be too difficult to ignore the utility of the technology. 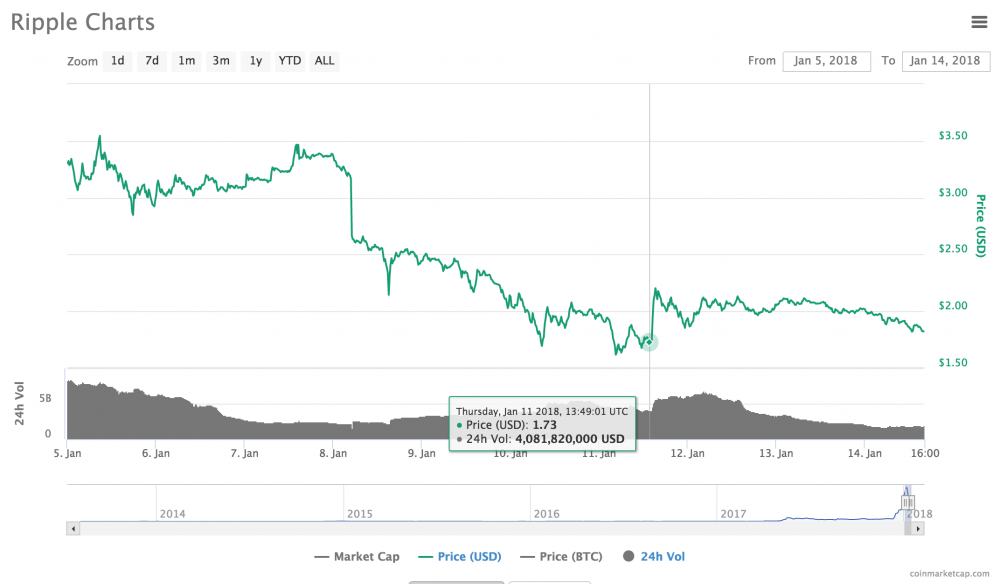