As shown below Microsoft decided to drop Bitcoin as payment method: a good opportunity for Ripple

“if you are a person who uses bitcoin you know it’s not always easy to find places where you can use the digital currency. That is about to change when it comes to Microsoft content.”

“The use of digital currencies such as bitcoin, while not yet mainstream, is growing beyond the early enthusiasts,” said Eric Lockard, Microsoft’s corporate vice president of Universal Store at Microsoft, posted on the company blog.

But today things are changing. 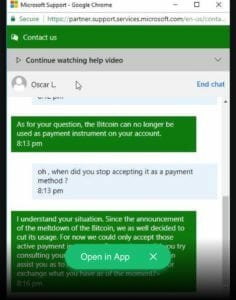 As seen on the screenshot, Microsoft is not accepting bitcoin payments anymore. they need a solid and reliable company, with short transaction times and low fees.

Given the past collaboration between Microsoft and Ripple (at the end of 2015) it is not impossible to think about the integration of XRP, or the use of the technologies developed by Ripple the company in the payment terms of the microsoft services.

By giving a chance to bitcoin, Microsoft has amply demonstrated its intention to rely on cryptocurrencies for payments, so why not choose a trusted company  and at the forefront of blockchain technology?
In this period of important partnerships for the company of San Francisco,and with a prosperous future in front, we will see what will happen in the coming months.